Today’s guest post is from Amy Diederich, President at Braithwaite Innovation Group.  While Amy’s career includes an impressive list of corporate America positions, she refers to herself as an entrepreneur and inventor. True to her inventor’s mindset, Amy skips over the boundaries between distinctly separate occupations to see the unique connection that no one else sees or envisions.

When I started my own consulting firm people cautioned me, saying “most small businesses fail within the first five years.” Everyone told me to start small - risk little. But as the daughter of a prolific inventor, I couldn’t heed that advice.

Seeing the world through an inventor’s eyes taught me to think BIG!

As far back as I can remember, my father was always tinkering and coming up with new creations.  He spent the first 44 years of his career as design engineer inventing new products for large corporations.  However, he always wanted to start his own business, and he never gave up on that idea. At 62, he took one of his inventions and started his own very successful business which he continued to run until he was 81.

Instead of listening to other people’s advice to avoid risk, I listened to my father who said:

Ten years later I am now co-founder of an even larger consulting firm. When starting a new business you must always see beyond what’s known because everything you will do is new to you. Be true to an inventor’s mindset and skip over the boundaries other people will try to set for you.

Always keep a spirit of imagination and ingenuity - embrace the inventor’s mindset.

Is Your Workplace Hijacking Your Values?How Amy Got Her Big On

Research: Women in Business & The Paradox of Power 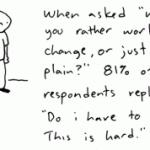 One Response to Maintaining imagination and ingenuity